[Reblogging The Fangirl] Straw Feminism: The Problem with Katniss Everdeen and the 'Better Girl' Trope.

Reblogged from The Fangirl: 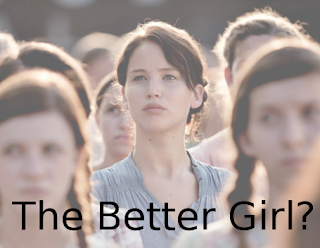 Lastly, humanize the other tributes in the Games, male and female alike. So the reader and Katniss feels the full impact of their deaths, and never forget that they are children, to emphasis that ALL children not matter where they come from or how they were raised do not deserve to die for the sake of entertaining the Capitol or the readers/audience of books/movies.
It’s important to point out that these are characters in a book. They and this story were constructed by a person. How the women are portrayed and marginalized wasn't done by the fictional world, but by their creator, the author. While I don’t think that Collins is aware of sheer amount of sexist tropes she was regurgitating in these books, much in the way many readers don’t see them, it doesn’t mean they are not present and very potent.
Katniss isn’t a feminist role model. Hunger Games isn’t a feminist story. It is, however, a fascinating example of the much heralded "strong female character" is actually a very disturbing sexist trope, a straw feminist, whose story doesn't teach us to be courageous, and self reliant, but instead to be better than other women, by being more like men. Just like Twilight it perpetuates the lie that the love and approval of men is all any woman needs to be happy.
On the bright side, both Hunger Games and Twilight prove that women are a power in the literary and film markets. We buy books, and movie tickets, and we are hungry to see ourselves reflected in the media we consume. Despite my criticism and frustrations with both series, I have affection for them too. They are compelling, interesting and very entertaining stories, that remind me of what I used to be like when I was younger, and how far I've come. Because of that, I know we can do better.
We can build on this foundation, learn from Collins and Meyer’s mistakes, and write better stories.
Stories with lots of different, complex and fully realized female characters. Stories about courageous mothers mentoring strong daughters, and supportive sisters who fight side by side for a better life. Stories where women can be villains and heroes and every single point in between. Maybe even all of them at once, because real women are not simple, and their fictional representations shouldn't be either.
A feminist story shouldn't be about elevating one woman over other women, or even making women better than men. It's about treating female character and female stories with the same care, respect and effort put into male characters and male stories.
Feminism Hunger Games Meta reblogging Susan Collins The Better Girl Trope Twilight
Source: http://snarkycake.blogspot.com/2013/12/straw-feminism-problem-with-katniss.html